Today, an article at heise online claimed, that Lenny is supposed to ship this year, quoting Alexander’s blog entry. While I can’t find a single word in Alexander’s article claiming that we’ll release this year, I’m pretty sorry that just after we failed the first deadline which was obviously too “optimistic”, we get another one which is too short.

Two month’s ago I created a pretty simple estimation regarding Lenny’s release by looking at the rc-bugfix-rate of the last two releases and applying them to the current number of rc-bugs. As a result it looked more likely that we release Lenny in June 2009 than in September 2008. Until now, my guess for Lenny’s release still holds, at least the updated rc-graph lies perfectly on the line I’ve created two months ago. 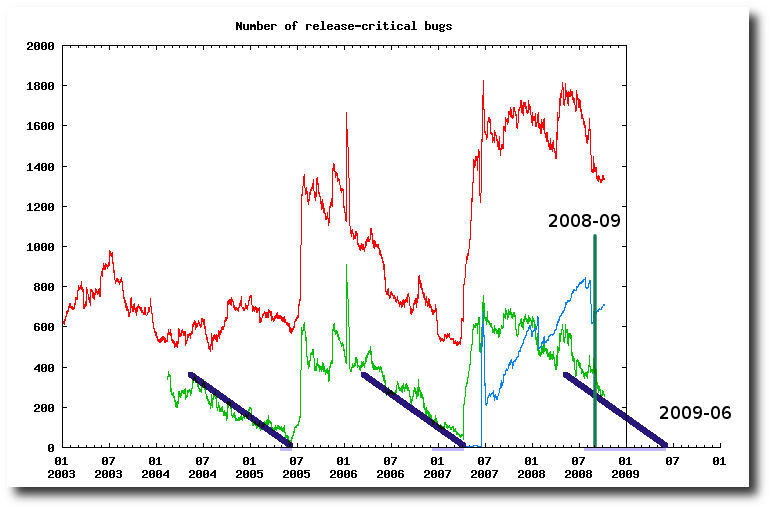 While I wish that we’ll release Lenny as soon as possible, I hope that someone will clarify the proposed release date to the media and this time with a more defensive deadline. Some people might actually trust our estimation (I know this sounds silly). And even if everyone knows that Debian notoriously releases too late – we could at least try to propose more realistic dates and update them regularly. Just two weeks ago I still read and heard in the media that Debian will release Lenny in September although it was clear at this point that this is impossible.