Two months since my last status update of my initial guess for Lenny’s release date, time for an update: 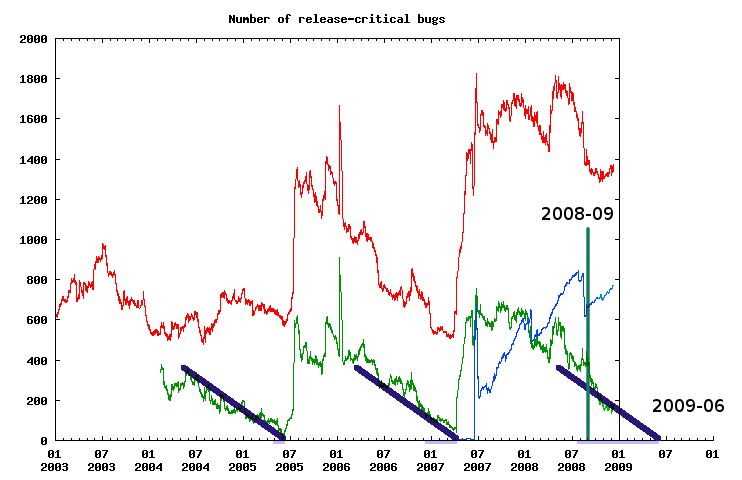 I don’t know what the current “official” release target for Lenny is, but I still think we’re heading towards Spring/Summer 2009.

The last related mail on -devel-announce is from October 2008 from Alexander who hopes that we’ll release Lenny at least by the end of 2008. I’ve read an article with an interview with Steve McIntyre somewhere on The Register where he said:

“Bastian’s being a little bit pessimistic based on the data he’s looking at, but as far as I know, he hasn’t spoken to any of the release team. As far as Lenny goes, we’re ‘almost’ there,” he told The Register.

That interview was in the beginning of October.

It doesn’t bother me too much, that we release late. What bothers me is that we don’t correct our estimated release dates even when it’s obvious that there is no way we will release in time. It’s really sad that we keep our users in the dark about the fact that we can’t release in time until it’s already too late.

I believe many users would appreciate if we’d honestly say: We don’t know when we release, but currently we have x RC bugs open and looking at the last releases we think it will take roughly n months to fix them and release, instead of the good old “We release when it’s ready”.

Another important point: Unstable is frozen for almost five months now. If you buy a current laptop, chances are hight that it might not fully work with Debian “bleeding edge” unstable, since it’s horrible outdated. Some of the newer stuff can be obtained from experimental if you’re brave enough, but if you’re not, unstable is getting more and more unattractive compared to other distribution’s current versions. This is really something we should try to fix after we released Lenny.