Reportbug finally has a GUI!

Reportbug finally shows all the bugreports for a package in a list which is easily filterable. So when you’re confronted with a huge list of bugreports but searching for a specific problem, you can just enter a few letters in the filter and the buglist will shrink immediately. This missing feature was basically the most important reason why I developed reportbug-ng: Users are expected to don’t report bugs which are already filed against a package, but the main tool which was used back then to report the bugs didn’t make this task trivial. Now it does and it’s a good thing! 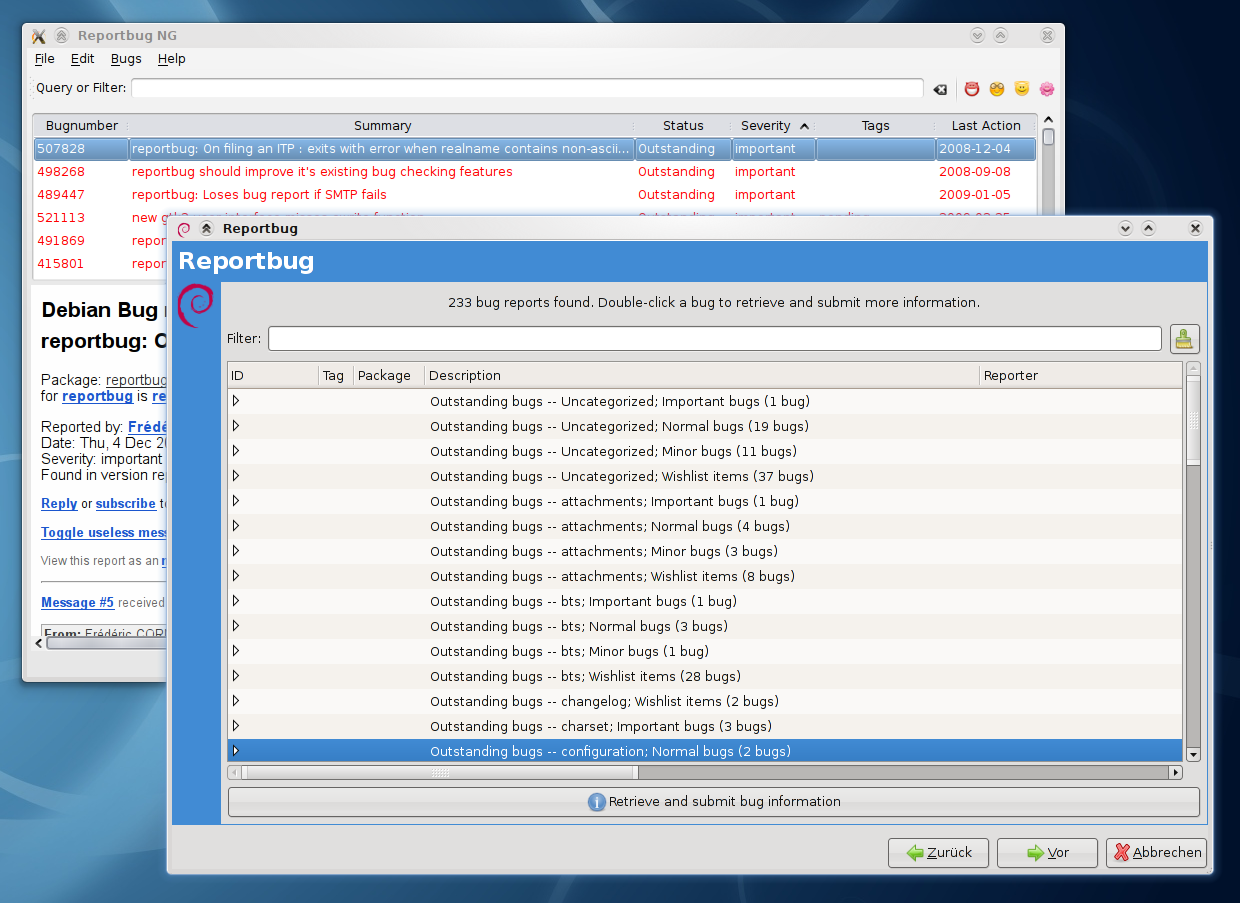 Compared to reportbug-ng, reportbug shows the bugreports of a package in a tree-view, while rng shows them in a table-view. The difference is that reportbug could theoretically group serveral bugs together, like merged bugs. It currently only uses this feature to group bugs of the same severity and status. Rng does that by coloring the lines. Unfortunately in reportbug all nodes are collapsed by default, which is not very usable since you have to expand every node in order to see all bugreports. This costs the user several clicks in order to see all bugreports.

It’s also not possible to sort the bugs via the columns of the table, e.g. sort by date of last action which I think is a huge feature in order to quickly find certain kind of bugs (old bugs, bugs sorted by date of last activity) – but that’s probably easy to fix.

Another good news is that Reportbug now brings it’s own editor so the user is not forced anymore to use an console based- and maybe unfamiliar editor to compose his bugreport. This is a huge step forward regarding usability. It also moves the concept of writing a mail to the BTS a bit more away from the user which is a good thing. Maybe the BTS will support an alternative way to receive bugreports in the future so mail clients may become superfluous for reporting bugs.

Under the hood reportbug still parses the HTML from http://bugs.debian.org/ go gain the bugreport instead of the BTS’ SOAP interface. This coupling is of course dangerous since even the smallest change in the BTS webdesign could break reportbug. But SOAP support is already on the todo list of reportbug’s devs. I can only encourage this step, when reportbug-ng moved away from HTML-parsing to SOAP the actual amount of work it took was much less then I thought, I think it took me just one or two days and as a result there is python-debianbts which provides a bridge between the SOAP interface and Python.

In summary I think this is an important improvement for reportbug. There are still some minor issues like the welcome screen always showing, the nodes collapsed by default and the columns not beeing sortable but those are small issues and easy to fix. I’m very happy to see this improvement, since it will motivate the not so tech-savvy folks to report bugs, and more bugreports will ultimately lead to a better distribution.